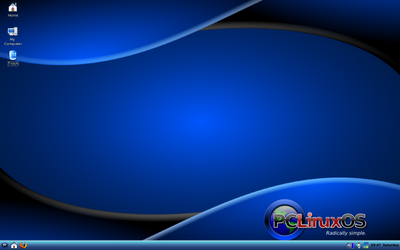 There has been much hue and cry in the linux community for delay in PCLinuxOS 2009. But to me Texstar and the Ripper Gang are always on time. For example, In 2007 we had PCLinuxOS 2007, in 2008 we had PCLinxOS 2008 MiniME, and now, the freshly brewed PCLinuxOS 2009.1 (the small increment .1 is a minor bugfix). You might wonder if PCLinuxOS 2008 was actually a full-blown release? Again to me, it was. Unlike other mini distros, that MiniME was way too much easier to extend, you just had to pull in your favorite packages from the repo.

Well, now onto PCLinuxOS 2009.1. What's so great about it? I would again say, every bit of it. Like a labor of love. It has the usual video driver config tool, a gentle theme, a good selection of applications, RemasterMe and my all time favorite, PCC. Did I miss anything? Yes. This time it has introduced a Synaptic Repair Tool too. And it's as usable and easy, as any of the home-grown tools of PCLinuxOS. Kudos to the pclos people!

Here is one distro that does not run after those bleeding-edge things, all for good reasons. I have never faced any annoyances while working on pclos. So I don't care whether it is the latest like Fedora, OpenSuse and Mandy. I am sure it has the most recent stable stuff. I dare say it is this distribution that can give M$ a run for its money.

First I installed it on my spare Compaq notebook that has an aging Celeron M processor. And I find it quite snappy. Right from switching on the button to full-blown KDE took 1min 20sec only. On a Core2Duo Pentium or Centrino, I am sure it will dwarf many other desktop-wannabes.

What "bang"???
This distribution lost its edge long time ago. There is absolutely nothing special about it any more.

I always thought of pclinuos as a Mandriva Plus. Now it is just a Mandriva Minus.

PCLinuxOS 2009 is still a Mandriva+ if you value stability and usability. I have been using Linux for last 10 years. And found PCLinuxOS to be most stable and easy distro. It is as stable as working on a Debian, but so simple that even a kid can work.

I'm quite hesitant. If I install PCLInuxoS in my computer, can I already install dropbox with a breeze. That's my primary concern from switchin from ubuntu to pclos.

The closed mindedness of Linux users continues to astound me. PCLinuxOS is guided by a different set of rules. Just accept it. Stability and ease of use are its primary goals. Hence, instead of wizz-bang new releases every 6 months or so, it simply keeps updating on a rolling release. For those of us that grew tired of wiping and reinstalling (dist-upgrade is not foolproof enough IMO), it's a godsend.

Now, what exactly is the edge it lost? Did it actually have an edge? It's simply a great distro for those that actually want to use their computer instead of doing administrative tasks and getting stuff to work right.

I was a Mandriva user and then discovered PCLinuxOS2007 which was my default distro for friends-family-newbies. Lately, Ive gone for Mandriva 2009 w/KDE4.2 but I cant wait to give PCLOS another shot.

Have they done anything special to make it easier to install PCLinuxOS on netbooks?

My dad has been on PCLOS for two years and sees no reason to change. My mom loves the eyecandy of KDE4.2 on my laptop so I wont change hers until they get KDE4.2 she now enjoys.

Texstar and the gang should only release when they are ready because the PCLinuxOS systems that I have installed all have aged well with the regular updates. I love keeping up with the latest and greatest in the free desktop environments which show constant changes but my friends/family dont need that, they need for it to work and to make the transition from Windows easy, which it does.

I asked once a relative Linux newbie why he chose PCLinuxOS out of all the Live CDs his brother gave him and he said, it was the only distro he had seen which had a nice clean grub menu for his dual boots and the one which was familiar.

Too many distros try being bleeding edge. I`m happy there are a few distros that aim towards stability and ease of use. If you like to tinker, PCLinuxOS is a bad choice. If you want to get your work done, it is a good choice.

PCLinuxOS gets it right. They focus on stability and correctness first, hardware detection and software variety second, and whiz-bang third. That is snubbed by some people for not being "edgy" and "exciting" and "with it" enough, and to those people I say - this is Linux. Go find what makes you happy!

But when it comes to the best blend of ease of use, stability, functionality, usability and common sense... PCLinuxOS wins hands down in my book. It is the only Linux distribution I would dare use to run my business. And I have been using it in that capacity since before it hit version 1.0 (which was the 2007 release).

If you want to geek out, tweak out, or reinstall every 1 to 6 months... look elsewhere. If you want to install and then forget about the OS and actually use your computer to get stuff accomplished... this is the distro for you.

And to the poster who commented that it's "Mandriva Minus", you are obviously not familiar enough with both to be considered reasonable in your statements. Mandriva is a very good distribution, but there are some major differences between the two distros that give PCLinuxOS a clear and distant lead IMO - so distant that it's hard to even see Mandriva as a contender... and they come in second place!

/*but there are some major differences between the two distros that give PCLinuxOS a clear and distant lead IMO - so distant that it's hard to even see Mandriva as a contender..*/

It's a great distro.
An important thing, that only PCLinuxOS has is the RestoreMBR utility : it's very important in case you want to use multiboot, if the grub does not detect the other OS's installed in the HD, then simply lauch this application and everything is done.
Try to install Debian+Fedora+Windows in the same PC and you'll see what I am talking about!