Desktop Linux Dilemma - To Swap or Not To Swap?

Linux swap space has been a mystery for years. The same is true for Windows. Remember those Virtual Memory and pagefile thing?

Let me tell you, I neither use/create swap partition in my Linux (Mepis 8.0 and PClinuxOS 2009 TR3), nor do I create/use pagefile in my Windows XP Pro SP3 machine at office.

In all I have just 1GB of RAM in home laptop and office workstation, both. I have been running of them for 1 year now, and I never run into any problems whatsoever. Interested what do I do on both the machines? I surf the web, do some word-processing, listen to music, watch movies, and occassionally do some video/audio editing.

So, what's the use of swap, unless I use hibernation or remaster Linux to create custom disks? I never needed it though I have only 1GB of RAM, whereas these days notebooks and desktops are being shipped with more than 1GB RAM such as 2GB, 3GB, 4GB, and even 8GB. Does swap space make sense in such a scenario?

I welcome your comments and appreciate all your ideas. 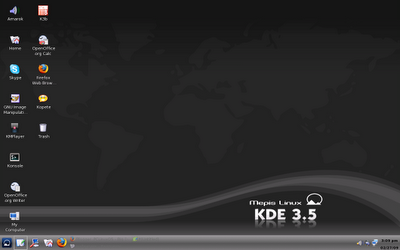 This time around I tried the daddy of many desktops, Debian Lenny, and compared it with Mepis 8.0 on my notebook. I am pleased how Debian has made itself easy to install and use - booting from netinstall.iso to a full-blown Debian Desktop was easier than ever. However, Warren has spelled magic onto Debain through his much tested Mepis. Till PCLinuxOS 2009 Final shows up I am going to stick with it for three reasons:

Having said that, one more worthy point is that - Warren moved to kernel 2.6.27, all for good to support a larger set of hardware, though the core is pure Debian Lenny. Mepis 8.0 is a pure KDE Desktop OS, it has very few gnome stuff, less than any other desktop Linux. Also it includes OO.o3 which is faster and has more features than the older 2.4.1 (remember stable Debian still sticks to OO.o 2.4.1).

Overall hardware detection is good. It configured most of the devices of my notebook. But I find the touchpad to be way too sensitive, so I copied the touchpad section of xorg.conf from Ubuntu 7.10 (it detects all my hardware) by running the liveCD.

I also pulled in extrastuff such as GIMP, Wordnet, Kthesaurus, Krita, Kplato, PDFedit, Realplayer, Audacious, Kaffeine, w32codecs, libdvdcss2, kchmviewer, Kget, Ktorrent, Skype, Kmail, KSirc, Audacity, Avidemux, Leafpad, Kplato, Kivio, and Kformula, to fully load my desktop.
Overall Mepis 8 is snappier than ever. Needless to say it is rock solid based on Debian Lenny. I have been tinkering with it for 3 days, but it has never borked. And the best thing in using Mepis 8 is that you can you can enjoy very easy Linux computing yet access thousands of Debian applications.
Posted by manmath sahu

Desktop Linux Mepis 8 Knocks all other Distros Down! 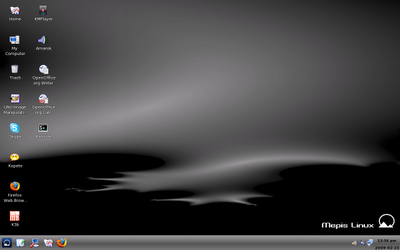 Installed Mepis 8.0? No? Go, get it. Sure it is not in the top of Distrowatch Rankings, but it undoubtedly is a champion of the Linux Desktops!

SimplyMEPIS 8.0 is a beginner-friendly desktop Linux distribution based on the fresh Debian GNU/Linux 5.0, Lenny. It uses 'Debian Lenny stable' foundation enhanced with an LTS kernel, key package upgrades, and the MEPIS Assistant applications to create an up-to-date, ready-to-use desktop computer system. In addition to Linux kernel 2.6.27.18, it includes a rich selection of desktop applications - KDE 3.5.10, OpenOffice.org 3.0, Firefox 3.0.6, and almost all the popular multimedia codecs and other stuff. Apart from these, MEPIS 8.0 includes BIND 0.9.6 and IPv6 is enabled out of the box.

Mepis head, Warren has taken every care to provide the best desktop experience through this release. On my notebook it readily autoconfigured all the devices including Broadcom 4311 WLAN card, even it did not ask for firmware. Besides, read/write support to ntfs is also there out-of-box. It seems Mepis is ready to give Ubuntu a run for its money. As of now, it's the best possible Linux Desktop around. I am going to put it on my work-machines, and will settle for nothing till the venerable PCLinuxOS 2009 knocks my door.

Making end to all those hoopla spanning 22 months Debian Lenny is finally released on 15th Feb 2009. It is a grand day for all those Debian fans and for those who respin it such as Mepis.

The very title - Windows XP Extreme Tweaking Tips for Linux User - in a Desktop Linux blog might make some visitors frown, but I thought it worthwhile to give a detailed XP tweaking tips. Because most of the linux users use or are compelled to use Windows at home or workplace, on different machines, or on a dualboot machine, for many reasons such as running some commercial applications, playing games, etc. Hope these tweaks will help readers optimize their Windows to the best.

Like Linux, the first step to optimize windows xp is making the startup first. You can run msconfig and change various parameters to improve boot speed. Click on the picture below to view its original size and get the details of my tweaks. Here I have disabled 16-bit application support (who uses it anyways?) and outlook mail, reduced timeout to 3 sec, removed everything from the startup except Avast antivirus and ctfmon. You can add/remove/disable items in the msconfig dialog box as per your requirement.

You might have noticed sometimes Windows takes more time to open a drive and/directory. You can make it quite snappy by changing the disk properties. Right click on the C, D, E… drives and uncheck Compress drive to save disk space and Allow Indexing Service to index this disk for fast file searching. Because very few people really need fast-searching on their home desktops, and today nobody at home faces space-crunch on their computers. Click on the picture below to view its original size and get the details of my tweaks. 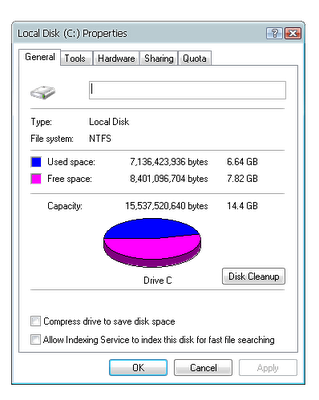 It’s good to have eye-candies on your desktop, but they take considerable amount of cpu and memory. However, you can enjoy the most the beauty of windows borders and desktop actions by optimizing visual effects. Right click on My Computer, click on properties option, then click on Advanced tab and select Settings below Performance box. And, choose custom option under visual effects tab, uncheck everything except Use Drop Shadows for icon labels on the desktop and Use visual styles on windows and buttons. Click on the picture below to view its original size and get the details of my tweaks. 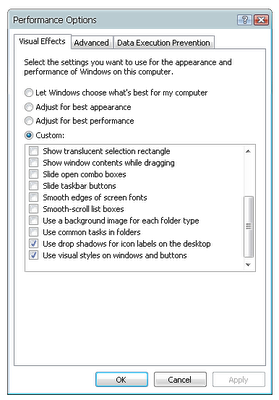 Next, you can change the system properties of Windows XP to a great extent to enhance speed and responsiveness of your system. The most important system properties tweaks are: disable error reporting, turnoff system restore on all drives, turnoff automatic updates, uncheck remote assistance and disable the devices that you don’t need. Click on the picture below to view its original size and get the details of my tweaks. Be sure, you have Linux as your another booting OS, so that you can easily manipulate your files in the windows partition in case of a system failure. 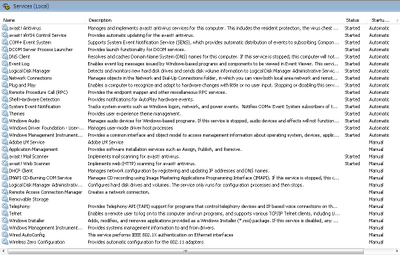 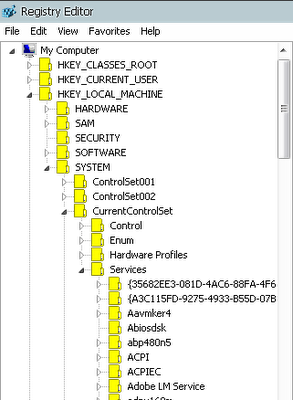 Finally, the most important thing to make your system fast, stable and usable is a small but wise selection of applications. I have chosen to install MS Office 2003 + Open XML addons (because MS Office 2007 is too slow and annoying), Ashampoo Burning Suite (because Nero is a memory hog), K Lite Mega Codecs (because it’s the most comprehensive codecs pack that merges seamlessly with Windows Media Player), Avast Antivirus (because it’s the best free antivirus suite, you can also try Avira), Foxit PDF reader (because it’s of miniscule size compared to adobe reader, and it’s fast), Winrar (because it’s better than winzip in every possible ways being small, fast and feature-rich), and Encyclopedia Britannica (but you can refer Wikipedia or Wordweb also). 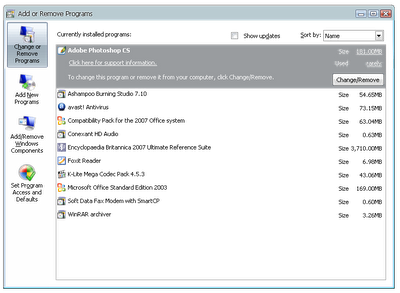 Well, now onto linux news. Mepis 8 RC2 has already been released and PCLinuxOS 2009 TR6 is on the way. Don't forget to try them both when they go gold.