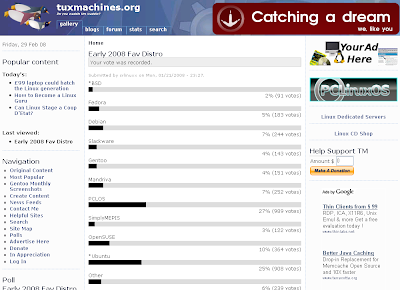 Please click on the image to see its actual size

One more good reason to rejoice. PCLinuxOS is leading the early 2008 desktop distro race.
Visit tuxmachines and cast your vote in favour of pclos.

PC has now become a necessity, be it a desktop or laptop. It's the next big thing in everyone's gadget wish list after mobile phones. But choosing a make/model of PC and choosing an OS for it is quite different from that of a mobile phone. Very often home users are duped into buying the latest and most powerful piece of desktop/laptop though they never utilize the full power of their desktop/laptop hardware and the software that comes preinstalled.

Most of the power desktops/laptops come with Vista preinstalled. But is it worthwhile for the extra money you pay for it? Even some windows lunatics say MS took more than 5 years to downgrade the good old XP. Well, if you will choose other OS than that of the preinstalled Vista, you will need to gather drivers and other productivity software. So, it's wise to run a Linux flavour such as PCLinuxOS 2008, Mandriva 2008, Mepis 7.0 or Linux Mint 4 Daryana (these are the latest as of Feb. 2008).

Always choose the latest desktop oriented linux (or pclinuxos without any second thought) flavour for home computing. Ensure the Linux desktop you are going to use is newer than that of your hardware. And always choose Intel hardware (it has better drivers support in linux world). You won't have configure your devices and/or look for drivers. Just pop in the disk and you will get a working desktop/laptop within a few minutes.

If your hardware is very old use an old distribution or the one with generic kernel. But ensure the distribution you are using should be newer than the hardware.

What's more a desktop linux such as pclinuxos will provide you with just enough software for your home computing requirement. You will get a cutting edge office suite (openoffice), image manipulation program (gimp), a truck load of instant messengers, p2p clients, browsers, multimedia players, and all that. Even you won't need to install a single program. However, if you need more, than the repository is just a click away.

Go to a PC retailer, ask her about the desktops and laptops. She will most definitely lead you to the selves having PCs with specs such as Intel Core2Duo, Dual Core, Centrino, ATI or Nvidia Graphics, and heavy RAMs exceeding 1GB. Probably she will tell you to buy the latest HP, Thinkpad or Vaio, or even more, a powerbook. Many customers go by it and bring home a power performer.

My friend, Satya, an HR manager, asked me to about buying a laptop. His requirements included word processing, spreadsheet generation, web surfing and watching movies. He is not a gamer. Last night he brought home a HP DV series laptop (specs: 1 GB RAM, Intel Core2Duo and NVidia Graphics with 256 display memory). I tried it. It was very fast and responsive. It is very good box for avid gamers and developers. It costs around Rs. 60,000.

To our surprise, that costly HP laptop performed better while ripping a DVD, else the performance difference in other jobs was zero, we could not notice any difference.

So, what's the point buying that power machine paying almost twice the price than that of a model that just meets your requirement impeccably?

Anybody who is looking for buying a laptop/desktop for home use please don't be fooled at the latest Intel processors, costly graphics cards, high capacity hard drives and that pre-installed Vista OS. No need to pay almost twice the price of a base model.

Processor: Celeron M 530 or above (cheap yet great performance)
Memory: 512MB (enough you will never need more)
Graphics: Onboard Intel Graphics (don't go for those Nvidia or ATI if you are not a gamer)
Hard drive: 80 GB (why more than this, buy some DVDs instead and store those heavy files)

I was looking for PCLinuxOS flavours with latest xorg and kernel. PCLinuxOS official version is yet to be released. And it may be May till the final reaches mirrors. So I thought why not try its gnome remaster. It's the same pclinuxos with gnome desktop. To the gnome remaster I added crossover linux and installed photoshop (my fav image editing software) and ms office (my favourite office suite, though I love Linux I don't like openoffice or gnome office). Also I searched a while for themes in gnome-look.org. And here is the result of what I got. Even vista people will envy this eye-candy pclinuxos.

Click on the images to see the actual sizes 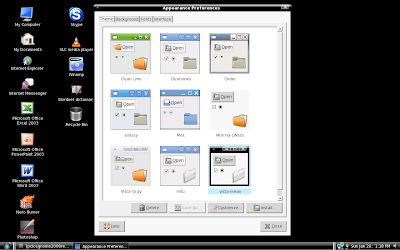 PCLinuxOS Gnome screenshot showing nerolinux, ms office apps and photoshop icons. Also the theme manager showing the default themes + customized linsta theme. I also changed the gnome main menu with vista icon. Some where I have renamed native linux icons. So that many windows users will feel at home. 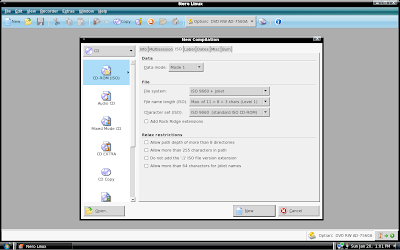 Nerolinux on top of crossover linux on my pclinuxos gnome desktop. 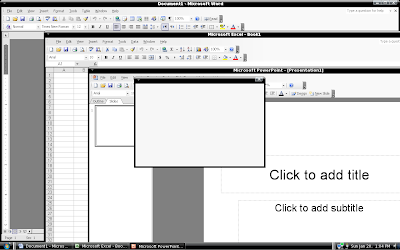 MS Office on top of crossover linux on my pclinuxos gnome desktop. 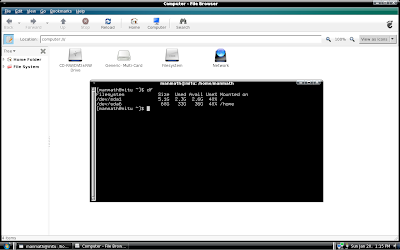 rxvt on my pclinuxos gnome remaster. 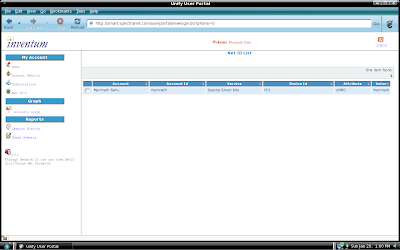 Epiphany on my pclinuxos gnome remaster. 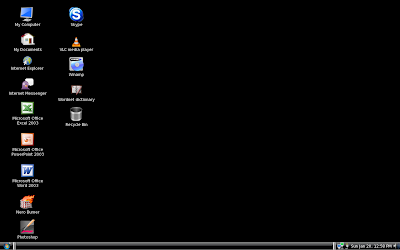 My PCLinuxOS gnome desktop with the launch icons of the apps that I use.

Linux woes told through PCLinuxOS - as my friend tells it

My friend Sudhanshu wants to share few words with Linux community. He was a Windows user now turned to a full-time Linux user only last week. He asked me several good things and bad things of linux, I told him to recollect all his thought and put into paper. Here is what he says. I thought it would be better to put the ideas on this blog. Because PCLinuxOS is the best usable and easiest desktop in the Linux world. At least I think so.

Hope, the members will address some of the issues raised by my friend. So that he (and many others) will know why Linux is so if it is so.

"I just want to share some of linux ecstacy and agony with you.
Linux is a great server. In my office we never had any problem running web servers on Mandriva, RHEL or Debian. But I wonder why Linux Desktop is still rough around the corners. Let me site some examples (all from my experience).

Despite all those things I use Linux. I am proud of its growth. It's improving like anything. Only last sunday, I deleted my windows partition and did a fresh install of PCLinuxOS. Because I love FOSS, GNU and Linux. I like their philosophy of software development and deployment. And I like the linux security. But as I told earlier, I just pray god and the developers to smooth the rough edges of Linux. Hope the situation will improve in next few years.

Thanks all the forum members."
Posted by manmath sahu