Airtel GPRS Internet on Your Linux PC through USB Cable

Internet through GPRS is not a joyride, but you might need it during some bad times when your ISP is down, broadband cabling in your area is messed up, or you are on the move. In such circumstances you may pair your mobile phone with your pc and easily get connected to the Internet. Here are some details on how to get internet working on your pc using GPRS in your Airtel Mobile Phone.

First, you need to active GPRS on your Airtel mobile phone. Dial  *567*11# to activate gprs and dial *567*13# to get mobile internet. Usually Airtel (or any other mobile service provider) will send settings which you will have save/install on your mobile phone. After that you should recharge your prepaid Airtel mobile phone with Rs. 98/- (as of 27th April, 2010) to get unlimated GPRS internet access for one month.

Next, you need to install ppp and wvdial on your Linux PC. Then change your /etc/wvdial.conf file to read:

Additionally you should also consider adding the following few lines to your /etc/sysctl.conf as a root user. It will reduce packet transfer overhead considerably.

That's it! Now connect your Airtel Mobile phone to your PC through USB cable, and as a root user (su or sudo, whatever appropriate in your case) enter wvdial in a terminal. And lo! You are connected to the web. If you want to connect to web as a non-root user, follow this link for further instructions.

You can also use Airtel SIM in your USB modem and connect to the Internet. For this you will have to use "Modem=/dev/ttyUSB0" in place of "Modem = /dev/ttyACM0" in your /etc/wvdial.conf

At Last RHEL 6 Beta Shows Up

Finally, Red Hat Enterprise Linux 6 Beta is here. The Beta is a big transition from RHEL 5 in terms of core packages, desktop environments and applications. “Red Hat Enterprise Linux 6 blurs the lines between virtual, physical, and cloud computing to address shifts taking place in the modern IT environment. Featuring updated core technology, from the kernel to the application infrastructure to the development toolchain, Red Hat Enterprise Linux 6 is designed to meet the needs of the coming generations of hardware and software technologies......” However, if you consider the package version status of the RHEL 6 final (when it comes) with contemporary distributions, it will still be little orthodox, as always.

The Red Hat Enterprise Linux 6 Beta is available on the following architectures: i386, AMD64/Intel64, System z, IBM Power (64-bit)." Read the release announcement and the press release for an overview of the most notable features. 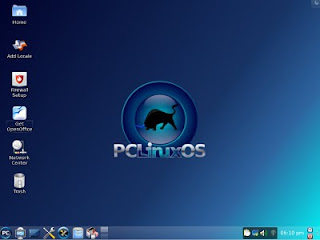 PCLinuxOS 2010 Main KDE edition features Kernel 2.6.32.11-bfs kernel (for maximum desktop performance) and full KDE 4.4.2 Desktop. PCLinuxOS includes all of the latest popular applications such as Firefox 3.6.3, Thunderbird 3.0.4, Dropbox for online backup storage, Pidgin 2.6.6,  Kymoney, Ktorrent, Gimp, Digikam, Amarok, Smplayer and much much more. In addition there are over 12,000+ additional packages available from our software repository.

As always there is support for Nvidia and ATI fglrx drivers. Many new wireless cards and printers are supported as well. Plus 2010 release is able to play the popular multimedia. Other versions (Gnome, Zen, LXDE...) have got the respective latest desktop environments and applications.

KDE4 is eye-candy. But most of the distributions that bundle it are not that stable or usable. Here I don't talk about PCLinuxOS 2010 or Mepis 8.5. They have done a great job in their implementation of KDE 4. But there are a lot others.

Well, coming to the point.... Of late I planned to install a KDE-only Debian desktop on a custom-made system. It was meant for somebody very new to Linux. That's why I thought of good old KDE 3 and the most stable distro of our times - Debian Lenny. Lenny installed a fully-functional KDE desktop on that machine (PIV on Intel 945 mobo) quite well. Afterwards I made some tweaks on the system so that my friend could easy plug his ntfs external drive, web cam, use his stock DVDs, windows media files and so many other non-free stuff. Again after configuring debian-multimedia it was easy as always.

KDE 3.5.9 on Lenny worked like a charm - quite responsive while carrying a truck load of kde apps. But those gtk apps looked butt-ugly on a kde-only environment. Here is a screenshot of how a gtk app looks on a debian pure kde desktop. 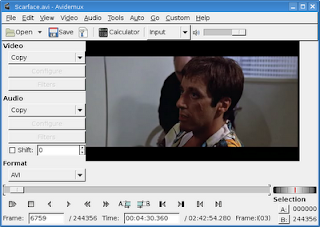 As you see, the look of apps is not consistent. Thank God, there is gtk-qt-engine package in Lenny repo. I installed this package and configured in kcontrol (kde control center) as shown below. And Lo! Upon reboot I got consistent KDE look across kde and gtk. 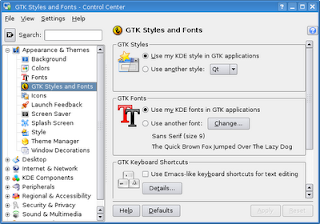 If you are also a KDE-lover but can't do without some gtk apps gtk-qt-engine is the way to go.

Here is the screenshot of Avidemux after installing gtk-qt-engine. 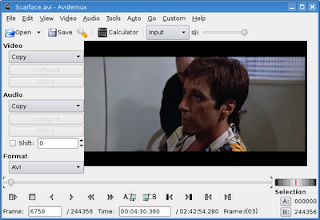