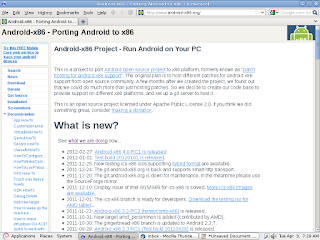 Started at mid-2009 Android-x86 project has not been able to offer a well-rounded release so far.

Then, it was a welcome relief for all those loved Android on mobile devices and wanted the same usability, performance and security on their x86 devices such as netbooks and computers.

I was an early adopter of Android-x86 for three basic reasons:

#1 it pumped vigor to some aging PCs (PIIIs, PIVs and Atoms)
#2 it was a tightly integrated project (not like fragmented Linux ecosystem)
#3 performance was great (expected being a mobile OS)

Till date the project has been delivering on those basis reasons, but has not been able to come up with a version worthy of consumer adoption. It always tries to catch up with the upstream, and pushes out unfinished releases (RCs) pretty close to the android releases. But before it could resolve all the issues and bring out a final bugfree release, Android jumps one version or one point up, and Android-x86 people drop it right there and sit together to work on the new upstream offering. Buggy RC stays just there. From Android 2.3 through 4.0, you get just unfinished RCs. I don't dare guess their future releases.

Here's the timeline of recent releases:

Each of the releases has been plagued with one or more of the following issues:

Is it just a product for developers to learn packaging for Android? Or for those hobbyists who don't expect anything more than being able to tinker?
Posted by manmath sahu