Best Time of the Year for Desktop Linux 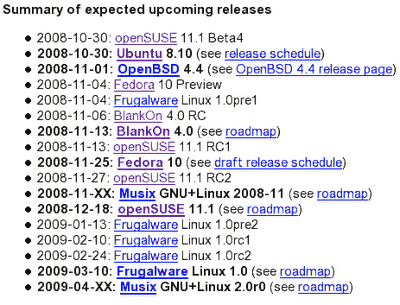 Screenshot of Upcoming Releases on Distrowatch, 27-10-2008

Last quarter of this year seems to be the best time for Linux Desktop (though not Year of Linux Desktop) with grand releases such as Mandriva 2009, and upcoming releases such as PCLinuxOS 2009, Mepis 8 (both have already released betas, finals may be anytime soon), DreamLinux 3.5, Ubuntu 8.10, Fedora 10 and OpenSuSe 11.1.

I have tested betas of DreamLinux 3.5, PCLinuxOS 2009 and Mepis 8. While PCLinuxOS is making a steady move as before, Mepis is making drastic moves forward. But the best thing is none are moving to KDE 4.x.x. That means both are standing tall as the leading desktop oriented distros. Fedora, OpenSuSe and Mandriva have plunged into KDE4 with some obvious tradeoff in usability and features.
Posted by manmath sahu

I downloaded it and installed on my low-cost compaq laptop - 1GB RAM, 1.84GHz Celeron M CPU, X3100 Graphics Card, Intel HDA Sound, and Broadcom WLAN Card. It's just 2nd day with pclos2009 beta, and I am happy. Everything works out of box. I am happy that pclinuxos people are sticking to KDE 3.5.10. But I think it would be better if Tex and the RG will update kernel to 2.6.27 and OO.o to 3.0. I have experienced both these in Mandy 2009, and found them to be really good. Better still if the final comes with GO-OO or OxygenOffice.

This 1st beta of PCLinuxOS 2009 is many ways better than Mandriva 2009 final! That means, the pclos 2009 final will be a revolution like its predecessor 2007.

Only yesterday I tried OpenOffice 3.0 final. It is a mega release of OpenOffice in many ways. Even it was the much hyped release of OO.o. Overall it seems a complete overhaul of the venerable open source office suite. There are dozens of new features and improvements.

Of all the improvements and additions what I liked the most are:

1. Support for MS Office 2007 file format
2. Multiple page preview in oowriter
3. Notes in the margin in oowriter
4. and almost a dozen of other niceties.

The best thing of this release is it has been a complete personality development to use less memory and cpu. It's a milestone in OO.o's development history.

Lastly, where did it miss? Feature-wise I have nothing to complain about. But as before, the age-old problem of OpenOffice, slow-startup is still there. May be future updates will take care of this problem. But it should have been addressed in this release itself. May be to achieve this the dev people would have delayed the release for some more months.

However, I am hopeful when Tex and RG will incorporate it into PCLinuxOS repo, it would be further polished - bother feature and performance-wise. So, I am not going to use it now. Waiting for PCLinuxOS 2009 and the OpenOffice that will come with it.