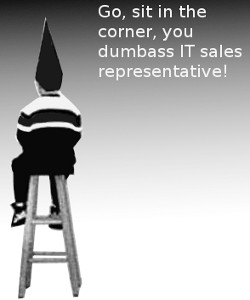 Indian IT force is growing, but the PC Hardware market is definitely not coping with that pace. It's still kind of mom-and-pop culture. I just came back from Nehru Place, tauted as the biggest market for IT products in India. Visited the outlets of big brands - Dell, HP, Lenovo, HCL, Acer, and a few shoddy brands such as Chirag Greenputers, eSys and Intex. Everywhere I found the representatives following the prospective customers and trying to throw their USPs, sometimes those USPs have nothing unique about them. Paradox!

Visit to Chirag computers (or greenputers, as the company calls it) was a laugh riot. A sales girl came up and handed me a brochure. Before she could start throwing tantrums I started catapulting her, "What's so green about your greenputers?". She went on and on..."Our computers save energy. They come with Windows 7 pre-installed and integrated automatic sleep modes preconfigured. Hence, use less energy. Each of our products has got Energy Star certification. Our computers have much storage space to save your documents that you won't need to maintain hard copies, you'll save on paper....", and she was confident throughout.

My next reaction, "WTF! You are such a beautiful girl, but why are you throwing such dumb points. Automatic sleep mode is neither unique to your products, nor a unique feature of Windows 7. AFAIK, it's been there since Windows 2000 and the hardware of that time, or before. Besides, computers generally never run out of space due to documents, it's the audio, video and graphics stuff that consume maximum bytes. Moreover, every other hardware manufacturer/assembler sells computers with Windows 7 and spacious hard drives comparable to yours, or sometimes even more. Are your products, in any ways, superior to, or different from, Dell, HP or Lenovo?"

She stood still and I went out.

Next I spotted a bunch of dumb representatives at Lenovo outlet. A suave gentleman told the features and prices of a dozen notebooks on display. "Do you have X120e, it's the one launched 4 months back, it sports an AMD Fusion e350 APU?" That gentleman moved to a group of his fellow representatives for an answer. After a few cross-questioning with that group he came back to me and told, "Lenovo doesn't have any notebook with that model number and there is nothing like such Fusion e350 APU, what's it, a graphics card, chipset, processor...?"

This time I did not utter that "WTF", instead I browsed the official websites of Lenovo and AMD on my tablet. Showed him, not only does that model exist but it's a top seller also. Then, I told him at length about the Fusion series APUs. And also made him understand that world is not restricted to his showroom.

I had similar funny experiences with the guys at Dell, HP and HCL. Most of them were aware of only a few stock phrases such as: Dual Core, i3, i5, i7, Atom, Nvidia, ATi... nothing beyond. All of them are still in the believe that AMD processors produce much heat. Whereas AMD processors that came after Athlon Neo II run much cooler than any of the Intel chips. They looked quite puzzled when I told them that not just AMD and Intel make processors, there are VIA, Cyrix, Tegra and a dozen others...

None I found had the faintest idea about various processor families, chipsets, platforms and the upcoming products. None of them knew any difference between selling computers and potatoes.

This is the situation in Delhi, let's forget about the rest of the country.

BTW, I am going to buy Asus 1215B.
Posted by manmath sahu