People have been using Microsoft Office as an office productivity suite ever since the home desktop revolution started. Likewise they are using Adobe Photoshop, Winamp, some old Nintendo games etc. Most of them who have started computing in PCLinuxOS or other desktop linux such as Ubuntu, Mepis, Suse or Zenwalk, still can’t find the productivity from Microsoft Word and Adobe Photoshop from their Linux counterparts such as OpenOffice.org Writer and GIMP. Besides gaming in Linux World is not much of a phenomenon in comparison to gaming in Windows World. 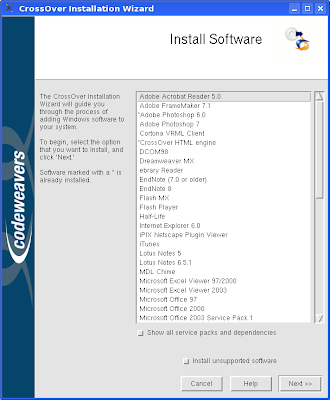 Chills to them who are using Linux but still retaining the copies of Word, Photoshop and games. They can now use those Windows software on their Linux desktop. Crossover Linux 6 makes it possible for every Linux user to use some versions of Flash, Dreamweaver, Framemaker, Photoshop, Microsoft Office, some games and many win32 applications to run on Linux Desktop. They can enjoy the benefit of Windows productivity and Linux Safety.

On my home PCLinuxOS desktop (VIA Mainboard & Chipset + Intel P4 2.66) I tried Photoshop, Word, Winamp and Super Mario. All of them worked fine except for some minor flaws.

I have been using GIMP for quite a long time, but I still longed for Photoshop. Gimp has no option to use spacebar (which is quite common in Photoshop) to browse though the image while editing. Besides animated GIF creation in GIMP has always been painful. (Hope GIMP developers will soon incorporate these features). I purchased a copy of Crossover Linux 6 online. 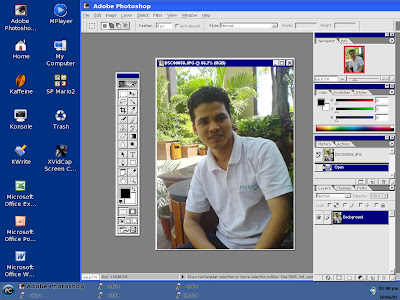 Installing Crossover Linux 6 was damn easy (Another version - Crossover Linux 6 Pro is also available but functionality of both general and pro are almost similar, for a home desktop I will never recommend the pro version). I got an rpm and installed Photoshop 6 in its win2000 bottle (you have option to install in win98 bottle also, keep in view the Microsoft application compatibility). One frustration is that Crossover offers installation only upto Photoshop 7 whereas the computing industry uses Photoshop CS3. However, home desktop users will be fully satisfied with Photoshop 6 (that’s what I use), no need to ride on CS3. As you can see in the screenshot, on Linux, Photoshop docked panels also occupied positions in deskop bottom panel.

We may blame Microsoft Office many ways, but fact is that it rules all the office productivity suites. Microsoft’s usability is perhaps at its best in its office suite – the great contextual menus, handy reference and blazing fast behavior (characters are true only upto 2003 version, 2007 version has killed many of these great characters to be a little eye-candy). OpenOffice.org is good but compatibility with Microsoft documents is never perfect, besides it’s a way too slow. 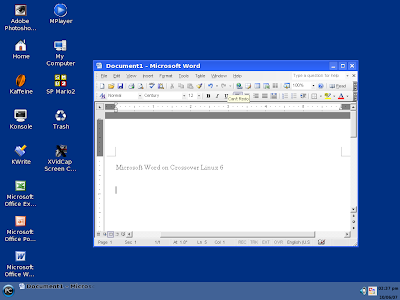 Microsoft Office installation was seamless. It was installed in less time on my PCLinuxOS than it might install on any Windows OS. I did a custom installation of only Word, Excel and PowerPoint. I use Thunderbird as my home mail client, so there was no point installing Outlook.

Super Mario Brothers and others

Gaming on Windows has always been great. On top of Crossover Linux 6 I installed Half Life, Mario, AceRacer and many others. But I loved the old world game Mario the most. 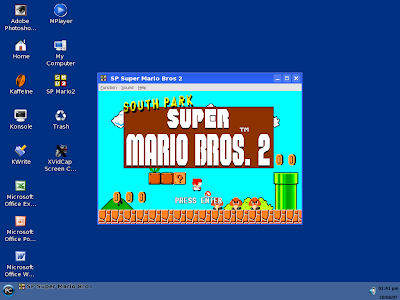 Including the above applications, Crossover Linux supports many win32 software. Try them and put your thoughts here.

Would you please give me a complete list of windows software that can be installed on linux on top of crossover linux 6?

please visit http://www.codeweavers.com/compatibility/browse/cat
for a complete list of compatible applications.

I an new to Linux. I installed successfully PCLinuxOS 2007 and tried to install Crossover Linux 6 and I cannot seem to find out how to do it. If I simply try to run the downloaded file it will ask me for an application to open it with. Sorry if this is a very beginner question but I couldn´t find an answer anywhere.
Thank you,
Mihai

I an new to Linux. I installed successfully PCLinuxOS 2007 and tried to install Crossover Linux 6 and I cannot seem to find out how to do it. If I simply try to run the downloaded file it will ask me for an application to open it with. Sorry if this is a very beginner question but I couldn´t find an answer anywhere.
Thank you,
Mihai

crossover linux is just a platform on top of linux that supports installation of certain windows software.

after installing crossover office, look for install windows software, or something like that on the menu menu. browse through it and you will find how add windows software into it.

there is latest crossover linux, check with codeweavers website.