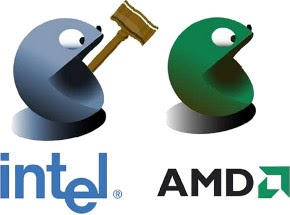 With the merger of ATi and AMD the new AMD Fusion platform offers far better value for money performance than Intel. However, AMD is still no more near Intel when it comes to mass adoption. Why? The reason is twofold:

1. Creates hype early but comes to party very late: Take for example the Fusion APU hoopla. AMD announced this groundbreaking technology 6 years back and kept on shelving for very long till Intel appropriated similar technology into Sandy Bridge. Sure, even now Fusion is a better proposition against any of Intel's Atom architecture. But sadly, Atom has become ubiquitous before Fusion knocks the door.

2. Great hardware but poor driver/software support: Creating new technology and throwing benchmarks of the same is not everything. AMD raved for its DirectX 11 and UVD support on the Fusion platform. It's great. But failed measurable in bringing out opensource drivers in a comparable time limit. Even today opensource Fusion driver support is bad at best. Be it gallium, catalyst or the inbuilt drivers of kernel 2.6.38, none work as well as they were tauted. The whole of device innovation trashed due to lack of proper software support. Whereas, Intel has promptly provided device drivers for Sandy Bridge. Intel's open-source VA-API implementation into graphics hardware is better off in many regards than AMD's XvBA under Linux. These days, VA-API works quite well and Intel even recently introduced support not only for video decoding, but also video encoding, using the VA-API library with the new Sandy Bridge hardware. Intel's next-generation Ivy Bridge support should be the same way. The recent Intel SNA technology has boosted Sandy Bridge as well as earlier Intel IGP performance to a great extent. Here AMD lags.
Posted by manmath sahu