Tuxmachines is a good website for some Linux enthusiasts (though my favorite is Distrowatch). Sometimes back I was looking for PCLinuxOS MiniMe reviews and hit http://www.tuxmachines.org/node/12897

In that page I liked the backgrounding to PCLinuxOS by the author, Gfranken. Especially his experience with Mandrake, and information on Texstar were very faithful accounts. Gfranken concluded the page with "10 reasons to try PCLinuxOS", that's what I liked the most. Those 10 reasons were so true and inspiring that I could not help stop myself from gluing my experience to them. Those reasons justify why PCLOS superseded its parent, Mandriva. 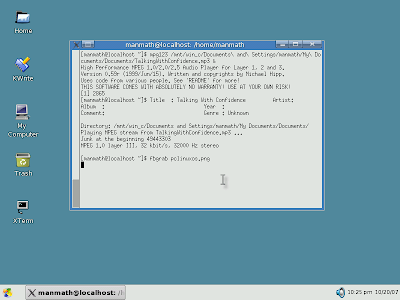 Hope this post will inspire many wannabe users to try PCLinuxOS, a productive desktop Linux.

Top Ten reasons to install and use PCLinuxOS:

Nice posts. But I am very much interested in PCLinuxOS 2008 roadmap. Would you post an article on it?

well no roadmaps to next release...instead of rolling out a new version every six months or so like many distros it tests the new version thoroughly before release and makes it available...so fewer bug fixes..and stable versions..it rolls out beta versions many times before final to thoroghly test before final release...try pclinuxos forums in support pclinuxos.com for more details

Shawn,
Thanks for posting such a nice reply. Let the people know the goal of PCLinuxOS to give the community a usable, stable and high performance desktop; not just frequent releases and updates.
Thanks.

PCLinuxOS, the distribution that "Just Works" that would be my motto for them. manmath said it right, and they have accomplished just that goal. I have tried many distro's and there are bunch of good ones out there. But out of all this distribution is the "Big Daddy of all Desktop Linux" home or office. I was a avid SuSE user from 9.0-10.0 thought it was "the Distro" until i decided to give PCLinuxOS a try.Hands down, in my opinion
the stability and performance can't be beat. The friendly usability is a definite plus for new Linux users.
I would recommend this distribution to any Linux user new or seasoned.

netmaskx90, thanks for those lovable words. it would be very nice if you make a list of have's and not's for pclinuxos, so that we will report our request to texstar. i am going to request textstar to incorporate full ntfs rw support in pclinuxos (of course, it's there is repository, but it's better to have it as a default install). plus i will also request him to add wordnet as a default pclos apps.

as you had some time with suse, hope you can suggest some great addition (or removals) for pclinuxos in the next big release that may come under the skin of kde4.

O.K. off the top of my head I can't think of anything really important but give me time and I will. As for some personal things I would like to see is a definite hplip update alongside printdrake for better HP printer/scanner support. Full ntfs-rw support incorporated on install as mentioned by manmath. I would also like to see ettercap in the repositories. I'm sure people will ask why, well,,,,, why Wireshark, Kismet, Snort, etc? For the same reason. Just nice to have in the repository pool.
and as for anything else none at the moment but more to follow for sure

netmaskx90, thanks for the wise suggestion.

the one thing i dont like maybe bcoz of lack of a big developer team and commercial support is lack of packages.see even package requests are not fulfilled list actually runs to 26 pages.compare with other distros number of packages available.being no.1 distro on distrowatch and having little more than 7000 doesnt make it great!
other than that good distro

Thanks for your observation. But is not 7000 already a big number? I think pclinuxos repository has more than enough if you count applications per task. Proliferating the number will, in my opinion, make the scene chaotic. I don't know you might have a better reason.

Also, PCLinuxOS is for home desktop users. And the number of packages in repository is already too big for it. Well, for other purposes the package-hungry people should switch debian or compile packages themselves.

Thanks for posting comment on this blog. I appreciate your views. May be in future you will see a vast number of packages in pclinuxos repository.

as a desktop distro pclinuxos is much more stable than ubuntu.

Why do pople lie like this-it cantboot up i 30 seconds ok maybe minute. Windos is worse.

Try 3secs running14 things at once in real-time-same time-3 secs
you cant do 2 . Amiga