The wait seems worth it after having face to face with PCLinuxOS 2008 MiniMe. I have a special interest in this edition, because it was downloaded on my machine coinciding with the birth of my first child - Piyush. Both have unlimited possibilities, but the possibilities of MiniMe is pronounced at its release whereas my son has to prove it at sometime in future.... 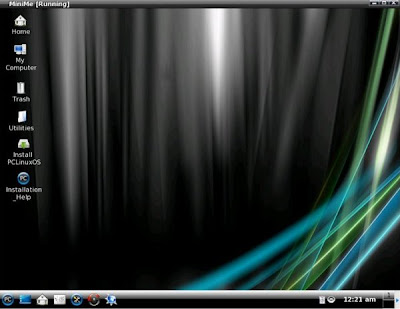 PCLinuxOS 2008 MiniMe was released on 7th Jan 2008. It is a minimalist live CD with KDE. It comes with 2.6.22.15 kernel and xorg-server 1.3. It is a minimal live CD that is bootable and installable. To it you can add your own background, window decoration, localizations, preferred applications and supporting libraries, to power up your desktop.

Tex and the Ripper gang have always gifted us with a better PCLinuxOS in every release, this MiniMe is no exception. But what I liked the most in it is its swiftness and look. The default window decoration Linsta Squared simply rocks.

The most noteworthy point in the release of MiniMe is that - PCLinuxOS regular release is just around the corner. I hope to see more in that as well.

Tex, you have done a great job.
Download : http://spout.ussg.indiana.edu/linux/pclinuxos/pclinuxos/live-cd/english/preview/pclinuxos-minime-2008.iso

it's a good news!
but when will the real big official pclinuxos 2008 be released.

nobody really knows exactly when the next pclinuxos 2008 full will see the light, probably it will be in May 2008, as Tex won't set it go untill the last bug is fixed. don't worry, the wait will be worth.

pclinuxos 2008 official full version will release in august or september of 2008.